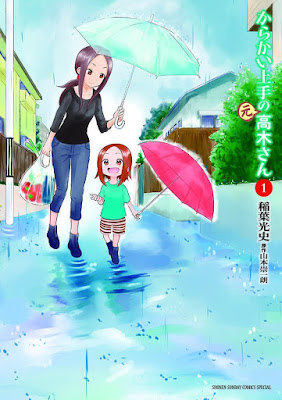 The series is about a girl, Takagi-san who loves teasing a boy, Nishikata.
The 7th volume will be released on December 12th, 2017.

One of the manga’s spin-off, Karakai Jouzu no (Moto) Takagi-san (lit. Teasing Master (Former) Takagi-san) is about their marriage life written and illustrated by Mitsufumi Inaba.

The 1st volume (the picture in this article) will be released on the same date, December 12th, 2017.

Karakai Jouzu no Takagi-san got TV anime adaptation, and will broadcast in January, 2018.