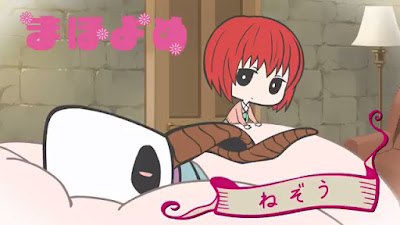 The official twitter account updated the short anime #8.
This time, the subtitle is “Nezou (Sleeping Position)”.
Chise tells to Elias that his bad sleeping position disturbs him from sleeping well so that he can’t get up easily.
Will Elias manage to get up?

The Ancient Magus’ Bride, aka Mahoutsukai no Yome, is airing this season.
The official twitter account updates a short anime named “Mahoyome” on the social networking site every Thursday (JST).
It is 1-week-limited, thus previous episodes are deleted.