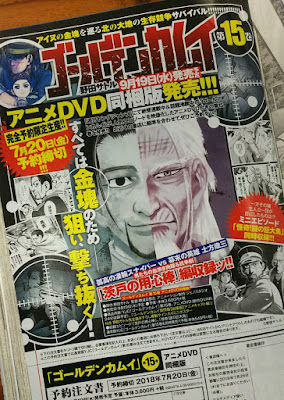 The official twitter account for Golden Kamuy revealed on May 17th that an OVA (Original Video Animation) will be bundled with the manga’s 15th volume special edition that will be released on September 19th, 2018.
It will be produced by the same anime studio as TV Anime, Geno Studio.

The manga has been serialized in Weekly Young Magazine since 2014.

That was announced also in the issue of the magazine that was released on May 17th.

The OVA will include two episodes that are made into anime from the manga.
One is a battle between Hyakunosuke Ogata and Toshizou Hijikata. They fight against each other as a bodyguard.
Another is a “mini” episode that a mysterious large bird appears before Asirpa and Saichi Sugimoto.

TV Anime “Golden Kamuy” has been aired for Spring 2018.