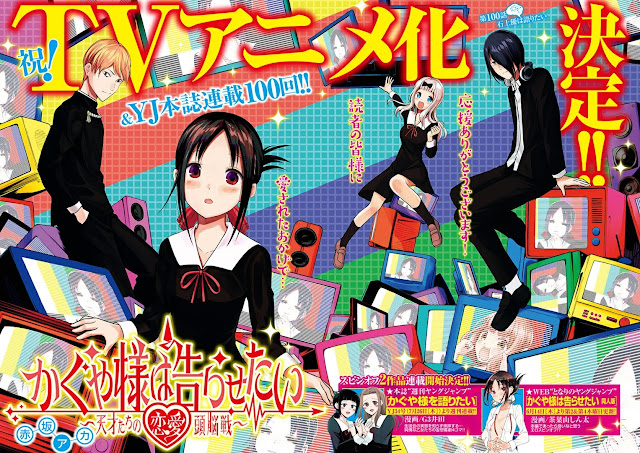 Kaguya-sama wa Kokurasetai, aka Kaguya-sama Love is War, written and illustrated by Aka Akasaka announced that the series has received two spin-off manga.
It was revealed in the 27th issue of Young Jump that came out on June 7, 2018.
In the issue of magazine, the manga announced also TV anime adaptation.

Kaguya-sama wa Kokurasetai, aka Kaguya-sama Love is War, is a romantic and comedic manga centering around Kaguya Shinomiya and Miyuki Shirogane. The manga is all about a “war” between the two to make one confess love to another.

The details of the two spin-offs are as follows;

“Kaguya-sama wo Kataritai” (Lit. We want to talk about Kaguya-sama) by G3 Ida will start the weekly serialization in the 34th issue of the magazine that comes out on July 26, 2018.
The protagonists are two girls who sometimes appear also in the main story. The student council is their aspiration but they have no idea about the reality there, therefore the ladies fantasize about what student council members are actually doing. It is 4-koma (4 panel) manga.

Shinta Sakayama is a manga artist who has drawn and published two Doujin of the series (the one that only adults can read).

A person “S” in the editorial department did not care about the rule;
“There is a person who has drawn doujin of Kaguya.”
“He has some relationships with Young Jump.”
“Then let’s have him draw a spin-off.”
It made Akasaka Kaguya-sama author and Sakayama Doujin author look each other in the eye with a serious look.

When meeting Akasaka, Sakayama‘s first word was “Akasaka-sensei, S-san, I am sorry for publishing the doujin!”

Sakayama admits all of the things Akasaka tweeted are true.

Teaser Visual of TV Anime. The girl is one of the protagonists, Kaguya Shinomiya.

The author of the manga, Aka Akasaka’s illustration for the announcement of TV anime.
“The (TV) anime adaptation of Kaguya-sama wa Kokurasetai has been decided! This is all thanks to everyone of you! I will do my best without causing trouble to capable staff, and hope you enjoy it!”