Since Halloween is just around the corner, our team wants to recommend you all some horror anime fit for the occasion! Below, we have listed five shows we think you should give a go!

*The shows aren’t listed in any particular order. Also, we excluded some of the most popular ones because, well, they’re already popular!

Higurashi no Naku Koro ni (When They Cry)

[Keiichi Maebara has just moved to the quiet little village of Hinamizawa in the summer of 1983 and quickly becomes inseparable friends with schoolmates Rena Ryuuguu, Mion Sonozaki, Satoko Houjou, and Rika Furude. However, darkness lurks underneath the seemingly idyllic life they lead.

As the village prepares for its annual festival, Keiichi learns about the local legends surrounding it. To his horror, he discovers that there have been several murders and disappearances in the village in recent years and that they all seem to be connected to the festival and the village’s patron god, Oyashiro. Keiichi tries to ask his new friends about these incidents, but they are suspiciously silent and refuse to give him the answers he needs. As more and more bizarre events occur, he wonders just what else his friends might be keeping from him, and if he can even trust them at all.

When madness and paranoia begin taking root in Keiichi’s heart, he will stumble straight into the mysteries at work in Higurashi no Naku Koro ni, a story that is told across multiple arcs.]

If you like gore and mystery, you will most certainly like Higurashi. The total count of episodes (2 seasons + an OVA) is 53, so you are in for a nice, long ride. Don’t get thrown off if you don’t understand some of the many bloody scenes; season 2 explains and clarifies the craziness of what happens in season 1 and brings us quite a satisfying ending. If you end up enjoying the storyline but the art style isn’t to your personal liking, fear not! You can always watch the 2020 remake that’s currently airing this fall. It’s a bit different in terms of the plot, but the iconic gore and creepiness of the original remains. Higurashi no Naku Koro ni is an adaptation of a visual novel under the same name. If you are feeling fancy, I wholeheartedly recommend playing the game!

[Nine students gather in their high school at night to bid farewell to a friend. As is customary among many high school students, they perform a sort of ritual for them to remain friends forever, using small paper charms shaped like dolls.
However, the students do not realize that these charms are connected to Heavenly Host Academy—an elementary school that was destroyed years ago after a series of gruesome murders took place, a school that rests under the foundation of their very own Kisaragi Academy. Now, trapped in an alternate dimension with vengeful ghosts of the past, the students must work together to escape—or join the spirits of the damned forever.

A feast for mystery fanatics, gore-hounds, and horror fans alike, Corpse Party: Tortured Souls – Bougyakusareta Tamashii no Jukyou shows a sobering look at redemption, sacrifice, and how the past is always right behind, sometimes a little too close for comfort.]

Corpse Party: Tortured Souls is a horror anime known for being extremely graphic and gory. Don’t get me wrong – there are thrills at times – but its selling point is the portrayal of gore and the extremely morbid way that its characters die (thus the title). On top of that, it’s nice and short (only 4 episodes) so if you have 1.5 hours of free time to spare this Halloween, you have to give it a go! Corpse Party is yet another visual novel adaptation on the list! Once again, if you have some more time I recommend playing the game over watching the show for the full experience.

In 1972, a popular student in Yomiyama North Middle School’s class 3-3 named Misaki passed away during the school year. Since then, the town of Yomiyama has been shrouded by a fearful atmosphere, from the dark secrets hidden deep within.
Twenty-six years later, 15-year-old Kouichi Sakakibara transfers into class 3-3 of Yomiyama North and soon after discovers that a strange, gloomy mood seems to hang over all the students. He also finds himself drawn to the mysterious, eyepatch-wearing student Mei Misaki; however, the rest of the class and the teachers seem to treat her like she doesn’t exist. Paying no heed to warnings from everyone including Mei herself, Kouichi begins to get closer not only to her, but also to the truth behind the gruesome phenomenon plaguing class 3-3 of Yomiyama North.

Another follows Kouichi, Mei, and their classmates as they are pulled into the enigma surrounding a series of inevitable, tragic events—but unraveling the horror of Yomiyama may just cost them the ultimate price

Another has a very unique story compared to many other horror anime. Like the others, it’s also gorey, especially its most graphic scenes, but not as much as the previous shows listed here. The characters in Another are also very well-written and it’s extremely satisfying to see how they unveil the mystery of the story before our own eyes. We truly recommend watching Another since it has one of the most interesting plots in the horror anime genre;  It’s only 12 episodes long so you should be able to marathon it in one evening! 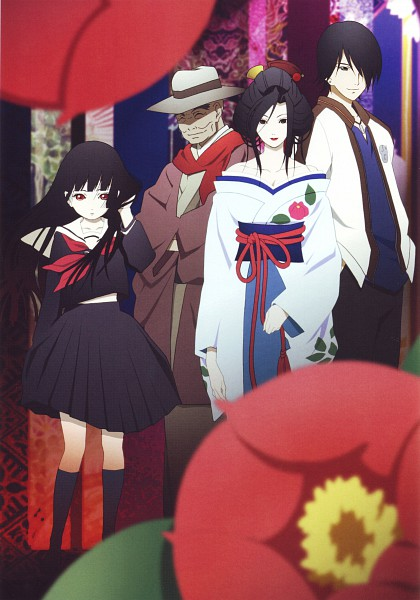 [Have you heard of Hell Correspondence? Those with a powerful grudge may only access this mysterious website at midnight, allowing them to enter anyone’s name and have that person be ferried straight to hell. Ai Enma, the Hell Girl, will not judge whether or not the chosen target deserves punishment; she will merely exact revenge on them for you. Not much is known about this young girl other than that she swiftly carries out her tasks with the help of three straw dolls. There is just one catch, however—as payment for carrying out such a request, the user must condemn themselves to an afterlife in hell.]

Jigoku Shoujo is not your typical horror anime – just as much as it is a series filled with death and murder, it is a psychological masterpiece that dives into the unique minds of its characters. In each episode, the characters are faced with the challenge of deciding whether or not exacting revenge on someone they questionably hate is worth eternal damnation. The truly horrifying aspect of the show is not the bloody murder scenes, but the concept of easily being banished to hell and living the nightmarish lives of each of the characters. This 4-season anime is one of the older shows on this list, but that’s what makes it an iconic classic. [Delinquent Juu Juuzawa is a lone wolf who does not see much use in befriending people. So when a girl named Ame Ochibana claims they are linked together from their previous lives, he is highly skeptical and doesn’t want anything to do with her. Even stranger is that her fondest wish is to be his servant. Thinking that Ame must be delusional, he tries to distance himself from her. But when a classmate is murdered, Juu instead decides to keep her close, believing the strange girl to be the culprit. However, her intelligence and skill begin to prove invaluable as the two begin working together to solve the murder.]

Denpa Teki na Kanojo is the shortest selection on this list; the OVA series is only two episodes long and can be watched in less than two hours! There is no reason not to give this dramatic, disturbing anime a shot; the show is filled with crazy, mysterious characters (especially the Ame, the heroine) whose unpredictable personalities will put you on the edge of your seat.

So these are the horror anime we wanted to recommend! We hope you’ll all have a creepy Halloween!